The earliest evidence of cancer in the human fossil record has been discovered in a cave in South Africa, an international team of scientists say. 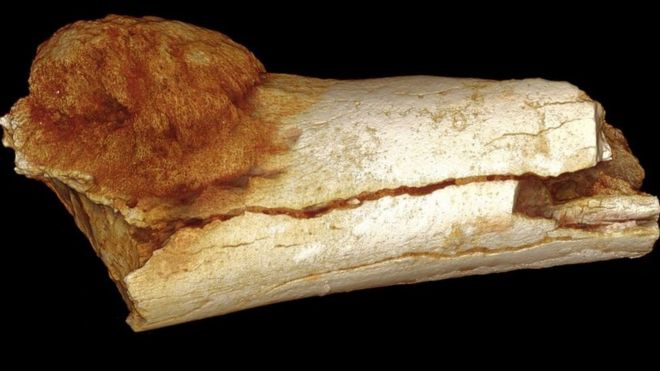 The aggressive tumour was found in a 1.7 million-year-old toe from an ancient human ancestor.

The toe belonged to one of the early hominins, either Homo ergaster or Paranthropus robustus.

The researchers said the findings clearly show cancer is not a disease of modern society, as some people claim.

Tumours have been detected in remains before – a Croatian Neandertal who walked the Earth around 120,000 years ago was one of the oldest.

The new discovery was made in a toe bone from Swartkrans cave in the Cradle of Humankind World Heritage Site near Johannesburg.

Data, published in the South African Journal of Science, showed the metatarsal had osteosarcoma – a rare and deadly form of bone cancer.

Meanwhile, the South African and British researchers also found a benign growth in the backbone of a two million-year-old Australopithecus sediba fossil from the Malapa cave.

Despite cancers being detected in a wide range of species, some people believe the disease is a uniquely modern problem.

Edward Odes, one of the researchers at the University of the Witwatersrand, said: "Modern medicine tends to assume that cancers and tumours in humans are diseases caused by modern lifestyles and environments. Our studies show the origins of these diseases occurred in our ancient relatives millions of years before modern industrial societies existed."

Dr Patrick Randolph-Quinney, from the University of Central Lancashire, told the BBC News website: "The idea that cancers are recent has come out of work on Egyptian mummies where they failed to find evidence of cancers in X-rays, which has skewed our reasoning on this."

However, he added that modern lifestyles do increase the risk of some tumours: "The rise of colorectal cancer with a Western diet, liver cancers from alcohol consumption, lung cancer and smoking are all diseases of modernity.

"There’s lots of different causes of cancer and they change through history – if you were a chimney sweep in London you were likely to get lung cancer – a lot is context dependent with new diets and new toxins."

Hannah Birkett, from the Bone Cancer Research Trust, commented: "This discovery is really exciting for osteosarcoma and the field of primary bone cancer research as a whole.

"Modern lifestyles and environmental factors loom large in people’s perceptions of the cause of cancer and this finding reconfirms the importance of considering other factors such as bone growth.

"This discovery will hopefully open new doors into investigating the cause of osteosarcoma further."