About 110,000 bees are being removed from a Cardiff hospital after honey dripped down the walls of a ward. 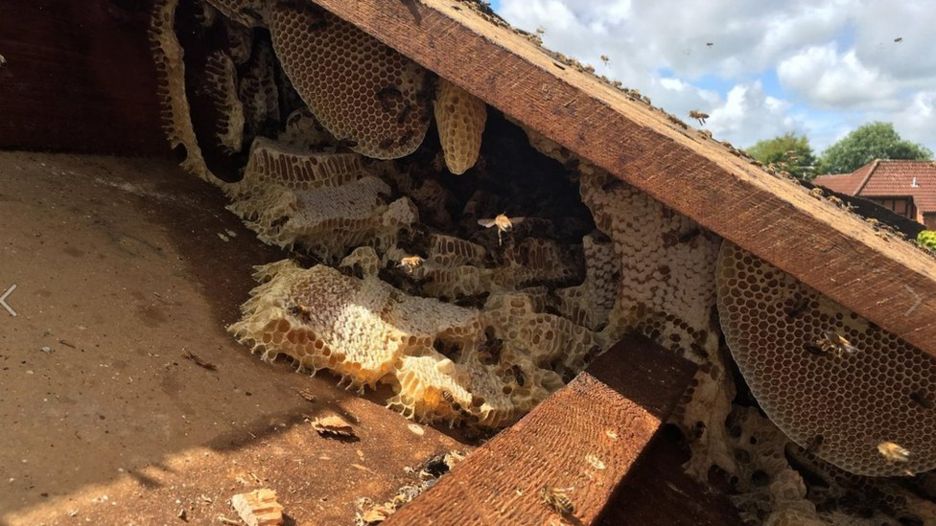 Patients in Rookwood Hospital’s elderly care assessment unit were stunned to see it coming from a roof space.

Staff tried to stop the honey flowing onto the floor with towels before calling pest control.

A specialist company removed the hive and returned on Tuesday to take a further 50,000 bees from a different building.

“It may sound like something of biblical proportions, honey coming through the walls and ceiling,” said Abigail Reade, from the not-for-profit company The Tree Bee Society.

“But people walking past wouldn’t have noticed [the hive] and it kept growing.”

Ms Reade said a normal colony contains about 50,000 bees but there were between 60,000 and 70,000 above the elderly care assessment unit as it had been there for about five years.

As one of the only specialist companies in the UK, the hospital contacted The Tree Bee Society, which is based in Lancashire.

“There are two ways of removing bees. We could have trapped them out by putting a one way valve in that allows them to go out but not in,” said Ms Reade.

“That would have taken three months. But we needed to be quick as there could have been issues with it being a busy day ward for the elderly.”

Instead, they used a circular saw to cut a hole in the roof and took the hive out, fixing it on to a frame, which allowed them to collect the bees in a box.

After that, they allowed some of the 1.5 million bees from their Ormskirk base to eat away the remaining honey from the roof.

Ms Reade described the size of the hive as “unusual”, but said it had space to keep expanding and it was only discovered after the warm summer melted the wax, allowing honey to drip down the walls.

During the removal, a second hive was discovered in a roof of another unit used to test patients’ ability to drive.

The team intend to take the hive to their base in Lancashire, where soap, candles and furniture polish will be made from wax.

While Ms Reade said the bees would have posed no danger to patients, she added that stings were “part of the job” for those removing them.