Researchers believe widespread use of fungicides on crops is reducing effectiveness of frontline medicines. 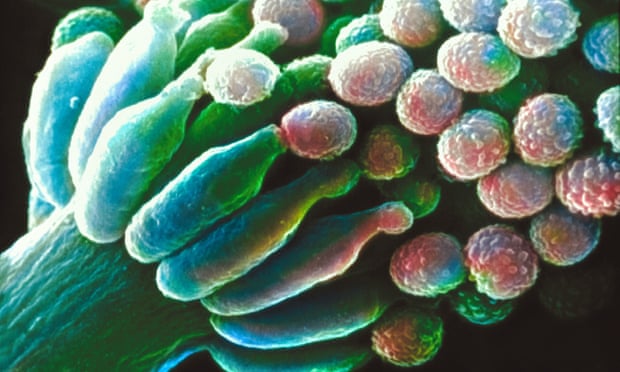 Scientists have warned that potentially deadly fungal infections are acquiring resistance to many of the medicines currently used to combat them. More than a million people die of fungal infections every year, including about 7,000 in the UK, and deaths are likely to increase as resistance continues to rise.

Researchers say the widespread use of fungicides on crops is one of the main causes of the rise in fungal resistance, which mirrors the rise of resistance to antibiotics used to treat bacterial infections in humans.

“There are close parallels between bacterial and fungal resistance, though the problems we face with the latter are particularly worrying,” said Prof Adilia Warris, a co-director of the newly opened Centre for Medical Mycology at Aberdeen University.

“We cannot afford to lose the few drugs we have – particularly as very little funding is being made available for research into fungi and fungal infections.”

Fungi cause a range of illnesses – such as thrush, athlete’s foot and dandruff – that can be treated relatively easily.

Other illnesses have more serious consequences. Individuals who are receiving bone marrow transplants and who are immune-suppressed can die of aspergillus and candida fungi infections, for example.

Another example of their grim potential was highlighted last week when doctors reported that a bagpipe player had died because deadly fungi had infected his pipes.

“We breathe in more than 100 spores of aspergillus every day. Normally our immune systems mop them up but, when our disease defences are compromised – for example, during cancer treatments or after traumatic injuries – they lose the ability to fight back.

“Fungi can spread through patients’ bodies and into their spines and brains. Patients who would otherwise survive treatments are dying every year from such infections.”

This point was also stressed by Prof Neil Gow, another Aberdeen researcher. “Essentially fatal fungal infections are diseases of the diseased,” he said.

In addition, premature babies and patients with the inherited condition cystic fibrosis are also vulnerable.

However, the problem is even worse in developing countries. In sub-Saharan nations, where millions are infected with HIV – which causes severe depletion of patients’ immune systems – infections with cryptococcus and pneumocystis fungi account for more than half a million deaths a year.

“The total global number of fungal deaths is about the same as the number of deaths from malaria but the amount that is spent on fungal infection research is only a fraction of the cash that goes on malaria research,” added Gow.

A vaccine that could protect against fungal disease has yet to be developed, while the rise of resistance to the class of medicines known as azole drugs is causing alarm among doctors.

Recent reports from the US and Europe indicate that resistance to azole drugs is increasing in both aspergillus and candida fungi. The widespread use of agricultural fungicides to protect crops and their use in some paints and coatings has been linked to the rise of this resistance.

Doctors have recently uncovered another worrying development: outbreaks of fungal infections – mainly cryptococcus – that have appeared in previously healthy people. In one outbreak, in the northwest US, dozens of people died.

In the wake of these developments, it was decided by Britain’s Medical Research Council to open its Aberdeen mycology centre earlier this year.

It will employ experts in the field to gain new understanding of how fungi move into the human body and survive there. It will also work on the development of new drugs and tests for pinpointing specific fungi that are infecting patients.

“Fungal infections are going to be an increasing problem in coming years and we need to develop the best defences,” said Brown. “We aim to do that here.”