Junior doctors in England will take part in five consecutive days of strikes this September as they ramp up their opposition to a new contract. 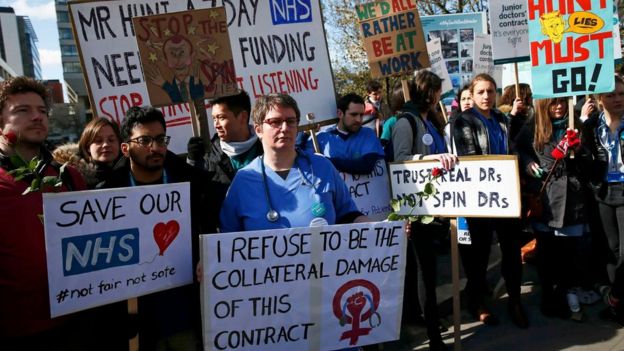 The British Medical Association took the step after members rejected the deal brokered between the union and government earlier this year.

Mr Hunt said people would be asking why the BMA, which had "championed this deal as a good deal for doctors" were now willing to "inflict the worse doctors’ strike in NHS history on patients, making them absolutely miserable".

He added: "Perhaps 100,000 operations will now have to be cancelled, around a million hospital appointments will have to be postponed, causing worry, distress and anxiety for families up and down the country."

And he called again for talks with junior doctor representatives to resolve the ongoing dispute.

The union said members felt the contract did not do enough to reward those who work the most weekends, was unfair on part-time workers and there was strong opposition to the fact that it was being forced on them.

Confidential papers drawn up by the BMA have suggested there could be five days of strikes each month for the rest of the year, the BBC understands.

The announcement reignites the long-running and bitter dispute. Junior doctors have taken part in six days of strikes this year, including two all-out stoppages.

Industrial action was put on hold in May when the two sides got back round the table at conciliation service Acas.

That resulted in a new contract being agreed, which BMA leaders encouraged members to accept.

But when it was put to the vote, 58% of medics rejected it, prompting the resignation of the BMA junior doctor leader Johann Malawana, and ministers to once again announce they would impose the new terms and conditions.

A new junior doctor leader, Dr Ellen McCourt, was appointed and, in August, the committee she leads called for the union’s leaders to sanction fresh strikes.

Dr McCourt said action was being taken as the contract, which will start being rolled out in October, "fails to treat all doctors fairly".

"The government has consistently said this is about creating a seven-day NHS, when junior doctors already work weekends and it’s been shown that the government has no answer to how it will staff and fund extra weekend care.

"With just weeks before the first group of doctors is moved onto the imposed contract, time is running out. This contract will be in place for many years, it will have a direct impact on patient care and whether we can attract and keep enough doctors in the NHS. It is too important to be rushed to meet a political deadline.

"We have a simple ask of the government: stop the imposition. If it agrees to do this, junior doctors will call off industrial action."

A Department of Health spokesman said: "As doctors’ representatives, the BMA should be putting patients first not playing politics in a way that will be immensely damaging for vulnerable patients.

"What’s more, the BMA must be the first union in history to call for strike action against a deal they themselves negotiated and said was a good one."