More than 3,600 patients have received potentially lifesaving bone marrow and stem cell transplants during the last 30 years, thanks to the kindness of strangers. 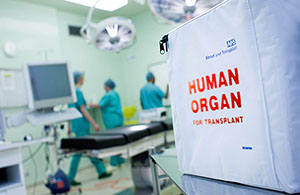 Stem cell transplants from adult donors or umbilical cord blood, sometimes referred to as bone marrow transplants, are often the last hope of survival for patients with blood cancers such as leukaemia.

NHS Blood and Transplant (NHSBT) is applauding their generous donors on the double anniversary celebration for the British Bone Marrow Registry (BBMR) and the NHS Cord Blood Bank – both of which play an integral part in saving lives.

The 30th anniversary for the BBMR and 20th for the NHS Cord Blood Bank were commemorated on World Marrow Donor Day (September 17), an awareness day for blood stem cell, marrow and cord blood registries.

The BBMR and NHS Cord Blood Bank work in partnership with Anthony Nolan, the Welsh Bone Marrow Donor Registry and Delete Blood Cancer UK as part of the Anthony Nolan and NHS Stem Cell Registry. The BBMR lists more than 344,000 blood donors who have also agreed to be potential bone marrow and stem cell donors, as well as over 14,000 cord blood units.

The BBMR recruits, tests and registers blood donors who volunteer to become bone marrow and stem cell donors, but is also part of a worldwide network of 76 stem cell registries which lists over 28 million donors worldwide and co-operates to match donors to patients across the globe. Currently, the BBMR and the NHS Cord Blood Bank have helped patients in over 40 countries around the world.

Each year around 2,000 people in the UK need a lifesaving stem cell transplant. Last year the registry helped find a match for more than 200 people. However many patients are not able to receive this potentially lifesaving treatment because of the shortage of a suitable donor.

Seventeen-year-old Carl Hillis is grateful to the BBMR which found a lifesaving bone marrow transplant for him eight years ago. In 2002, aged three, Carl was diagnosed with T-cell non-Hodgkin`s lymphoma and endured more than two years of chemotherapy treatment before going into remission. However, the disease returned in 2008 when Carl was nine.

The youngster received more intense treatment, followed by a bone marrow transplant to give him the best chance of survival.

Carl from Essex, who is studying journalism at college, said: "I don`t remember much about my illness when I was three, but I remember more when I was nine always being in and out of hospital for treatment and check-ups.

"All my family were tested but none were a close enough match. My donor, Tony, was a 10 out of 10 perfect match and was the same blood group. I am really thankful to Tony for his kindness and generosity as without the transplant I might not be here today. He has given me the chance to live a normal, healthy and fulfilling life. I am able to take part in a lot of sports such as rugby with my local club, swimming and motorsport. I am eternally grateful that he was on the British Bone Marrow Registry and my perfect match."

In 2013, Carl`s family anonymously wrote to thank his donor, Tony Blood, for his selfless act. Several letters later they agreed to meet, and now Tony is part of the family.

Mr Blood, 35, from Peterborough, who is now a father-of-two, added: "I was a serving member in the RAF when I was a blood donor and was asked about joining the British Bone Marrow Registry. It wasn`t until I was told that I was a perfect match to a little boy in 2008, I realised the enormity of what being on the register meant – the chance to save someone`s life. When I donated the bone marrow I spent a few days in hospital, and then afterwards I felt stiff and uncomfortable for a week or so. It was all worth it to be able to change the course of someone`s life and make a massive difference to them and their family.

"It was wonderful but nerve-racking when I got the chance to meet Carl and his family. It gave me the chance to meet him in person and see for myself how well he had recovered. Now we meet several times a year and both families are an extension of each other`s. He is a little brother to me, and calls me his brother from another mother! Now I am a dad myself I fully appreciate the effect Carl`s illness had on his family and their lives. It feels amazing to know that one simple act can have a huge effect to someone.

"I encourage people to register with the BBMR, you really could change someone`s life in doing so. There are many people out there hoping and praying that a donor match is found – it could be you."

NHS Cord Blood Bank began 20 years ago and is the world`s fourth largest public cord blood bank. It is also has the second highest proportion of rare tissues types in the world. Cord blood is rich in blood stem cells, similar to those found in bone marrow, and can be frozen indefinitely until a match has been identified for a patient suffering from life threatening illnesses.

The bank has over 14,000 cord blood units banked from mothers who have generously donated cord blood taken from the placenta and umbilical cord after the birth of a baby, which otherwise would have been discarded. Thanks to their gift, many lives have been saved by stem cells from a donation of cord blood. So far nearly 600 cord blood donations have been provided from the NHS Cord Blood Bank to help to save lives.

Gowry Ajanthan from London donated her cord blood at Northwick Park Hospital after she gave birth to Neellan seven months ago.

Gowry, of Sri Lankan decent, said: "I just wanted to help others benefit from the cord blood – it is very special and I didn`t want it to go to waste. Donating is very simple and straight forward, I didn`t have to do anything. Once Neellan was born the NHS Blood and Transplant nurses did the rest.

"I would definitely advise other mums to donate their cord blood so it can benefit someone who is seriously ill.

"Cord blood is very personal and when you have a baby you can relate to this, so you want to help those in need – donating your cord blood can make an enormous difference between life and death."

Thanks to new procedures such as next generation DNA sequencing (NGS) tissue typing developed by NHSBT, the speed and accuracy of donor identification has been increased. This in turn has resulted in better matching and reduced the time to transplant for patients which improves transplant outcomes. It also reduces the cost for donor testing.

Guy Parkes, Head of Stem Cell Donation and Transplantation at NHS Blood and Transplant, said "This year is a significant milestone for the British Bone Marrow Registry and NHS Cord Blood Bank – together they have offered the chance of life to an amazing 3,645 people.

"The BBMR has come a long way since it was set up 30 years ago with nearly 367,400 potential bone marrow and stem cell donors, and frozen cord blood units to help those with life-threatening illnesses. In addition, modern techniques such as next generation sequencing have speeded up the matching process, so lifesaving treatment is dispensed sooner.

"Our main priority is to ensure we have the right mix of donors to help increase our ability to find more matches. This includes donors from black Asian and minority ethnic backgrounds who are needed to help increase the mix of tissue types on the register. The NHS Cord Blood Bank greatly supports this by collecting cord blood from different communities.

"Our huge appreciation and thanks is given to those who are registered with the BBMR, especially those who have become donors and also mothers who have donated their cord blood, as without them saving lives would not be possible. Their selfless generosity gives others the chance of life. Each donation gives a lifeline to seriously ill patients and helps them survive life threatening illnesses."

NHS Blood and Transplant held a joint celebration in London earlier this month to mark the milestones, and invited BBMR donors and recipients to the event.

World Marrow Donor Day has been organised by the World Marrow Donor Association to thank donors worldwide, including cord blood donors, who have donated and donors who are on the global registry waiting to donate.