A record 170 organ donations took place across the UK in January, resulting in more than 400 life-saving transplants. 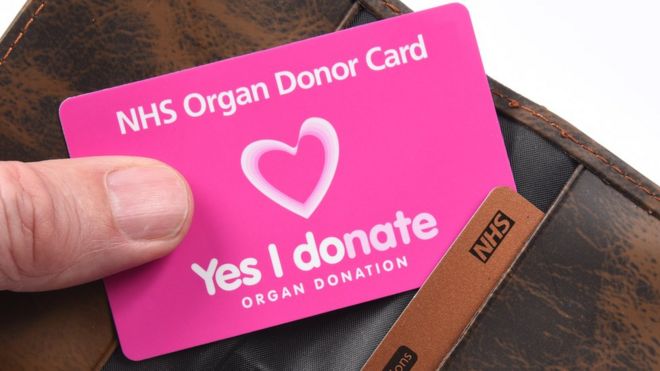 The rise in numbers comes as the NHS is running a public consultation into whether England should follow Wales and introduce an opt-out donation scheme.

The online consultation has so far had more than 11,000 responses; a huge amount bearing in mind similar surveys usually attract a few hundred replies.

The NHS’s Claire Williment said: “It has got the nation talking.”

Mrs Williment, head of transplant development for NHS blood and transplant (NHSBT), said this was “a positive thing”.

Anthony Clarkson, assistant director of organ donation and nursing at NHS Blood and Transplant said: “January was by far the busiest month on record for organ donation thanks to 170 very special individuals.

“Thanks to the generosity of organ donors and the support of their families, people in desperate need of a transplant are getting a second chance at life,” he added.

The 12-week consultation, which runs until 6 March, asks people their views on three questions:

Under the current system in England, people who want to donate their organs opt in by signing up as a donor on the NHS organ donor register and telling their family their decision.

If a decision has not been recorded at the time of a person’s death, hospital staff will consult family members on whether organ donation should go ahead. 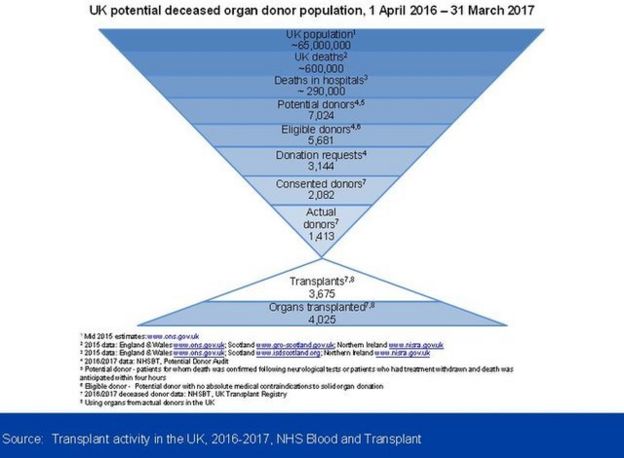 Families are always consulted before a donation takes place and 91% of them agree to it if their relative is on the organ donation register (ODR), according to figures from the NHSBT potential donor audit.

However, when patients are not on the ODR then 47% of families say no to a donation.

On average, one organ donor contributes to three transplants but it is possible for their organs or tissue to be used in up to nine people.

One option for the future in the consultation is for a person’s donation decision to be respected after their death, without their family being asked.

However, Mrs Williment said any decision on a change like that would be down to the Department of Health.

Dr Dale Gardiner, deputy national clinical lead for organ donation and intensive care consultant at Nottingham University Hospitals NHS Trust, said that donation should be considered to be “a fundamental part of end of life care”.

He added: “It is the most humbling moment of my career in intensive care when a family look beyond their grief and say yes to donation.

“The worst moment is when families do not know their loved one’s wishes,” he added.

Wales introduced an opt-out system in December 2015 with adults regarded as having consented to organ donation unless they have opted out.

When it started, more than one million people – 34% of the population – registered to opt in with 86,000 opting out.

However, a study published last December, two years into the scheme, showed that it had not increased the number of donors in the country. 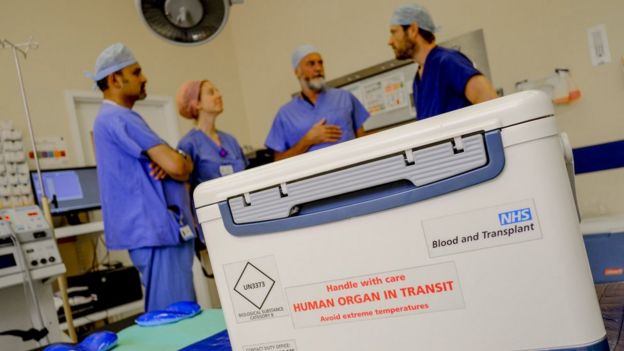 NHSBT figures show that donor numbers in the UK have increased in all but one of the past 10 years, while the number of people on the transplant waiting list has decreased every year since 2009-10.

Keith Rigg, consultant transplant surgeon at Nottingham University Hospitals NHS Trust, admitted that opt-out may not be the way to raise the number of donors in England even higher.

He felt that full results from Wales should be studied before such a move was considered in England.

“There is no clear evidence that this has resulted in an increase in organ donations and transplants where it has been introduced,” he said.

“There do appear to be higher rates in countries where there this has been brought in but many other factors muddy the waters.

“For example, in the three European countries with the highest organ donation rate – Spain, Croatia and Portugal – the reason is down to [other] changes,” he explained.

About 80% of transplant patients are waiting to receive a new kidney.

Fiona Loud, policy director at Kidney Care UK, said: “One person dies every day whilst waiting for a kidney transplant; it is abundantly clear that we need to review our current system now to stop this continuing.”

Last June, the Scottish government said it would bring forward legislation to provide an opt-out system.

However in October, a leading transplant surgeon in Northern Ireland said the province was “not ready” for such a system to be introduced.

Meanwhile, senators in the Netherlands have approved the introduction of an opt-out scheme in their country.

A boy with severe epilepsy has been given back medicinal cannabis oil that was confiscated from his mother at customs, the home secretary has said. Billy Caldwell, 12, received the oil after doctors made clear […]

NHS ‘must use spare capacity in private sector’ to Counter Pressures

Spare capacity in the independent sector must be utilised in order to ensure that patients access the fastest possible care, the NHS Partners Network, part of NHS Confed, has said in response to the revelation […]

Members of the Council of the Royal College of Physicians (RCP) have written to the prime minister, Theresa May MP, to set out their concerns about the capacity and resources needed to meet the demands […]