Anyone who has ever stayed overnight in a hospital will know how difficult it can be to sleep, surrounded by staff, machinery, trolleys and telephones. 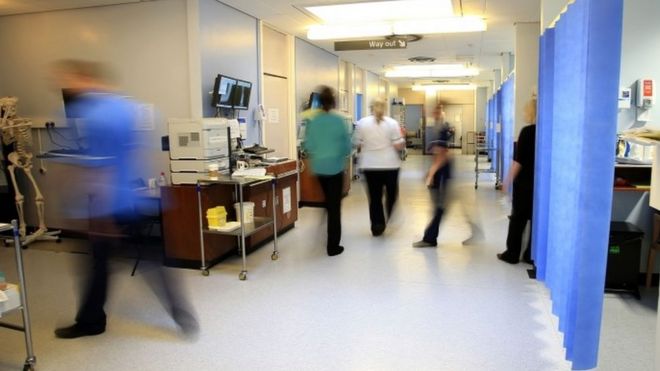 In the UK, 40% of hospital patients are bothered by noise at night, according to in-patient surveys.

But it’s not only the patients’ wellbeing that may be affected – high noise levels can also have an impact on staff performance and burnout rates.

Researchers from King’s College London say noise levels in intensive care – where the most vulnerable patients are looked after – regularly exceed 100 decibels.

That’s the equivalent of loud music being played through headphones.

And it’s not just the frustration of being unable to hear each other speak or the fatigue and irritation sparked by poor sleep that are causing concern.

At that level, noise pollution has been implicated in the development of a condition known as intensive care psychosis – a form of delirium where patients experience anxiety, become paranoid, hear voices and see things that are not there.

It means patients often decide to leave hospital before they are completely better – only to be re-admitted at a later stage.

Coronary care patients treated during noisy periods were found to have a higher incidence of rehospitalisation, compared with those treated during quieter periods.

“People leave early, and long after discharge the trauma remains. It puts patients off coming back,” Dr Andreas Xyrichis, lead author of the report, told the BBC.

For staff, a noisy working environment is unavoidable – but the consequent stress can affect their performance, while the difficulties of hearing each other and patients speak can compromise the quality and safety of healthcare.

Researchers say progress in combating noise pollution in hospitals has been “unacceptably slow-moving”.

So far, they say, attempts to reduce noise have been piecemeal and idiosyncratic.

Researchers are calling for a more co-ordinated approach – and solutions that actively involve patients.

The team, from King’s and the University of the Arts London (UAL), believe three key areas must be addressed:

Dr Xyrichis questions whether sound “is considered” when creating or redeveloping hospital infrastructure.

But he stresses that modifications can be made to existing environments at a relatively low cost.

Interventions such as sound-absorbing panels and noise-warning systems “have provided some benefit”.

Elsewhere, small trials have shown that sound-masking – the use of background sound (such as white noise) in particular environments to reduce noise-induced disturbance – can significantly improve sleep.

Most importantly, says Dr Xyrichis, research should “be more aware of the patients”.

He says research made clear that much of patients’ agitation over noise was often caused by “not knowing what the noises were”.

“It can be very frightening in hospital. We need to do more work with patients to find out about what kinds of noises stress them out.”

MRC scientists have developed a new laboratory test to diagnose peanut allergy. The test has 98% specificity and, unlike current options, it doesn’t run the risk of false-positives or causing allergic reactions such as anaphylactic […]

The first comprehensive survey of cannabis strength published in the UK for almost 10 years finds that high-potency varieties made up 94% of police seizures in 2016. The study, co-authored by King’s College London researchers […]

As the MRC becomes a constituent part of UK Research and Innovation (UKRI) Professor Fiona Watt FRS is welcomed as the Executive Chair of the MRC. Professor Watt is also Director of the Centre for Stem […]