Moorfields Eye Hospital Dubai (Moorfields) has saved the sight of a patient by changing the silicone oil that had previously been implanted in his left eye as part of treatment undergone in Europe for a recurring retinal detachment. 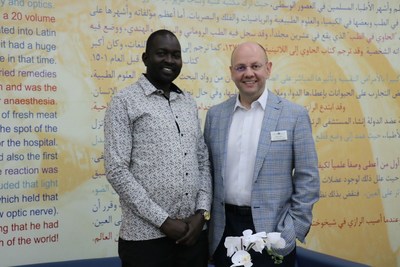 The patient – 40-year old Dut Jok Chalic Jok from Sudan – had a history of retinal detachment in the left eye, which had been treated in Europe in 2015 when silicone oil had been implanted in the eye. Typically the silicone oil needs to be removed three to six months after implantation to avoid further complications.

The original silicone oil injected into the patient’s eye had become emulsified and full of bubbles which reduced its effectiveness in helping to prevent retinal detachment and this led to a further total retinal detachment and also resulted in a very high pressure in the eye and the onset of glaucoma which also threatened to damage the optic nerve at the back of the eye, which would ultimately result in blindness.

The retina is a thin layer of light sensitive nerve cells that lines the inside of the back of the eye and is essential to be able to see. The retina may become detached because it has one or more holes (retinal tears) forming in the outer part of the retina that allows the vitreous (the jelly-like fluid substance within the eye) to pass underneath it and lift it off. Detachment is considered a medical emergency and urgent treatment is needed to prevent damage. Without treatment, a retinal detachment usually leads to blindness in the affected eye. Most retinal detachments occur as part of the natural ageing process in the eye.

The most common treatment for retinal detachment is a ‘vitrectomy’ operation, in which the surgeon removes the vitreous from inside the eye and then finds and treats the tears in the retina. A bubble of gas or silicone oil, depending on how the retina behaves during surgery, is then injected into eye to act as a ‘splint’ to hold the retina in position until healing takes place. Silicone oil injection has become a standard technique and improves the results for complex retinal detachment. However, as silicone oil leads to long-term complications (such as emulsification), the removal of the silicone oil from the eye is recommended.

Commenting on the patient case, Dr. Ammar Safar, Medical Director, Consultant Vitreoretinal Surgeon at Moorfields Eye Hospital Dubai, said: “The patient presented with a recurrent total retinal detachment and emulsification of the silicone oil which means that the one large bubble of oil had now broken down into literally millions of tiny bubbles, causing multiple complications. The surgery removed most of these tiny silicone bubbles from the eye (including under the retina) and we were able to reposition the retina successfully. The team was very pleased with the fast improvement in Dut Jok Chalic Jok’s vision and the normalization of his eye pressure again.”

Dut Jok Chalic Jok added: “I am very grateful to the Moorfields’ team led by Dr. Ammar for the quick intervention that saved the retina and the vision in my left eye. It was a challenge to find the expertise to treat the complications I faced and I was relieved to find that Moorfields had all the capabilities to perform the surgery required.”