An apprentice nurse from Broadmoor Hospital and a woman who has dedicated more than 30 years of her life to supporting children who have suffered burns are among the record number of healthcare workers and employers who have been crowned winners at the Our Health Heroes awards. 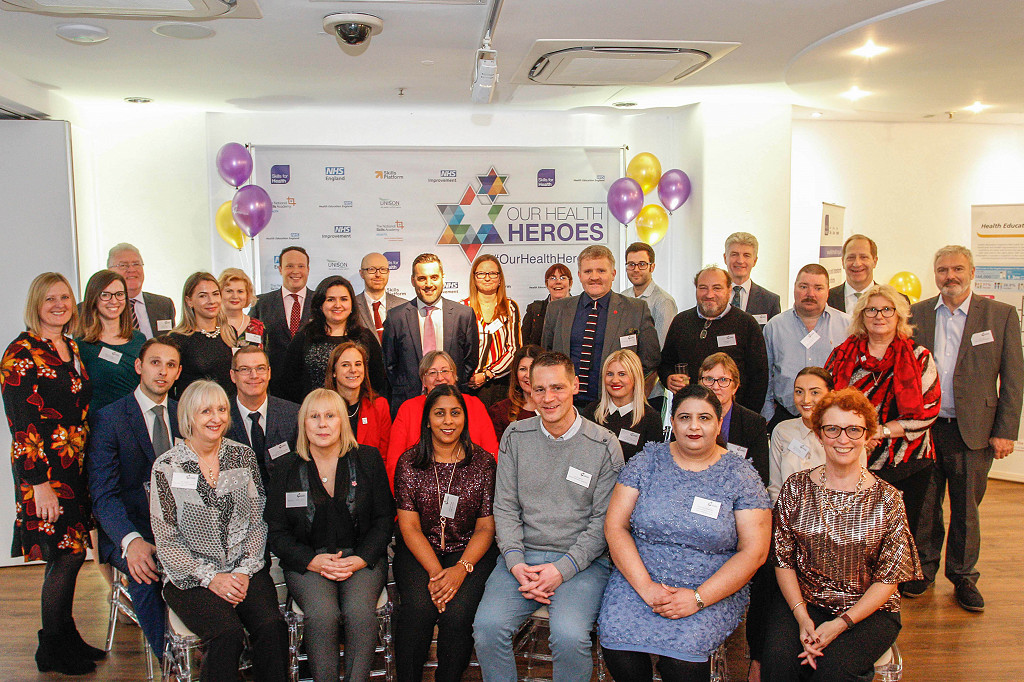 Organised by Skills for Health, the National Skills Academy for Health and headline sponsor Health Education England, the awards celebrated the unsung healthcare heroes from across the UK in seven categories.

During the ceremony, Sunetra congratulated 20 regional winners, seven national winners and four runners up including Apprentice of the Year winner Adam Cramp (27) from Bracknell who is currently completing a Nursing Degree Apprenticeship at Broadmoor Hospital in Berkshire.

Adam, who gained the most support during the public vote, was nominated by his work colleagues for his ‘can-do’ attitude and the positive contribution he has made to the teams he has worked with.

The Workforce Planning Team of the Year award, sponsored by NHS England, was presented to the Enhanced Nursing Care Team from Lister Hospital, Stevenage.

The team was set up to provide enhanced one-to-one care – or ‘special observation’ – for patients who are confused or pose a high risk to themselves or others.

The trust had previously incurred high costs in the delivery of this care, which was usually provided by unskilled agency staff, which resulted in poor patient experiences. Since the introduction of the Enhanced Nursing Care Team the trust has reported a reduction in falls, length of stay and agency spend. In addition, there has also been a higher standard of care for high-risk patients recorded.

Another notable winner was Helen King from Birmingham Women’s and Children’s Hospital, who was awarded the Lifetime Achievement Award #NHS70 for her work as a child and family support worker for patients with burns.

Helen impressed the judges with her lifelong commitment to her patients, during which she has set up an informal support group Enzo’s Friends which is the only paediatric-specific support service of its kind in the country.

Sponsored by NHS Improvement, Staff Retention and Wellbeing Employer of the Year:

Sponsored by UNISON, Operational Services Support Worker of the Year:

Sponsored by NHS England, Workforce Planning Team of the Year:

John Rogers, Chief Executive at Skills for Health, said: “Our Health Heroes gets bigger and better each time and this year was no exception.

“We introduced two new categories to allow us to celebrate some of the organisations who are leading the way in the Staff Retention and Wellbeing Employer category and those individuals who have dedicated their lives to healthcare through the Lifetime Achievement #NHS70 award.

“It has been an honour to hear more about those individuals, teams and employers who are going beyond their usual remit to deliver high-quality care to their patients and support to one another and their teams.

“Today’s award ceremony has reminded us all what makes our healthcare system so special. It’s the people and teams who go the extra mile, recognise opportunities for improvement and share knowledge and resources.

“Congratulations to all of those who have been recognised with an award this year, those who have taken home silver and bronze trophies and all 20 of our regional winners in the Clinical and Operational Services Support Worker of the Year categories.

Laura Roberts, Regional Director at headline sponsor Health Education England (HEE), said: “These award once again showcase the incredibly high standard of work and the vital role played by both apprentices and support workers. As the main sponsor of Our Health Heroes 2018 we extend our heartfelt congratulations to all the winners.

“Support workers and apprentices are a key part of the healthcare workforce and, through our Talent for Care programme, HEE supports employers with their workforce supply. This is achieved via school engagement, volunteering, work experience, pre-employment activity, apprenticeships and access to higher education and the registered professions.”

An NHS worker at Sheffield Teaching Hospitals has been named Clinical Support Worker of the Year in the prestigious Our Health Heroes awards. On Friday 23rd November more than 150 guests gathered for the third annual […]

Trainee GPs expecting a £20,000 golden hello incentive to train in certain areas have been denied payments after they were misled by a “lack of clarity” over eligibility. The government’s ‘golden hello’ scheme gives trainees […]

Voting Is Open on the Our Health Heroes Shortlist

A record number of healthcare workers and employers who are going the extra mile have been shortlisted at the third annual Our Health Heroes awards. Organised by Skills for Health, National Skills Academy for Health […]