The demand for hospital services is soaring, according to official data from NHS England. 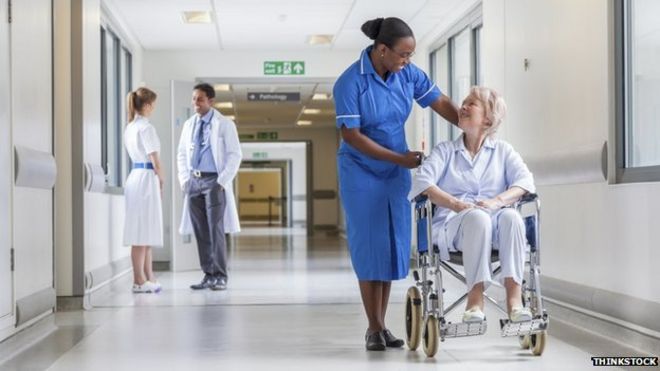 However, the NHS is failing to meet some key targets, including those for cancer treatment, ambulance response times and A&E waiting times.

NHS England acknowledged the increases were part of a continuing trend.

"The long-term trend is one of greater volumes of both urgent and emergency care and elective activity," it said.

It is the first time NHS England has published its data from a wide range of services on the same day.

The snapshot provided by "super-Thursday" shows that in the year up to June 2015:

However, two out of the eight targets for cancer treatment were missed.

They included only 81% of patients starting treatment within 62 days of being referred by GPs, when the target is 85% of patients.

That target has not been met since the last three months of 2013 and is now the worst since records began in 2009.

Emma Greenwood, the head of policy at Cancer Research UK said: "Today’s figures yet again show thousands of cancer patients are being failed.

"England’s cancer survival already lags behind comparable countries and will only get worse if the target continues to be breached.

"This cannot be allowed to continue."

The pressures on A&E do appear to be easing slightly with 94.8% of patients being dealt with within four hours.

The 95% expectation was missed for the whole of winter and dropped below 90%, but throughput in A&E departments is now close to the target.

And there was also a big increase – of more than 12% – in what are known as delayed transfers of care (moving patients out of hospitals and back into their own homes).

Anna Bradley, the chairwoman of the patient group Healthwatch England, said: "Yet again, the number of people being kept in hospital when deemed fit to leave has increased.

"What is frustrating is that we know that in some places services work really well across boundaries and patients are discharged safely with the care and support they need.

"With a few basic changes to discharge planning, this good practice could be replicated across all services."

Dr Chaand Nagpaul, from the British Medical Association, said: "With medical graduates turning their backs on general practice, there is no sign that the government will be able to fulfil its pledge to recruit 5,000 GPs and open all surgeries seven days a week.

"Whatever the rhetoric, on the ground these plans are completely undeliverable."