A new dementia atlas, published by the government, reveals patchy NHS care for the condition across England. 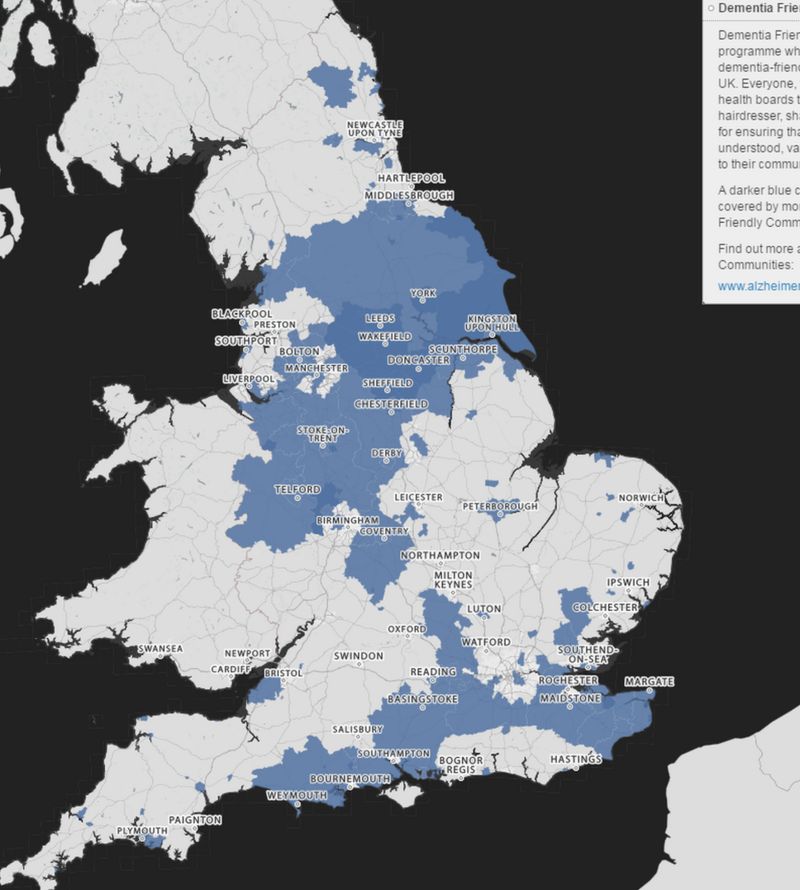 While some regions on the map appear to meet national standards in terms of offering regular reviews and support, others fall short, says Health Secretary Jeremy Hunt.

He said tackling the disease was a key priority and the new dementia atlas should drive improvements.

Charities said the “postcode lottery” of care was unacceptable.

Care in your area

The atlas maps five themes of care – prevention, diagnosis, support, living with dementia and end of life care – using benchmarks for each.

For example, every person living with dementia should have an annual check-up to review their care needs.

In some areas of England, such as Aylesbury and North East Lincolnshire, around 85% of patients get these face-to-face meetings.

Regional variation in population density and age could explain some of the differences, but not all, say dementia charities.

George McNamara from the Alzheimer’s Society charity said: “The causes of variation need to be investigated to ensure care is never a gamble.”

Caroline Abrahams of Age UK said: “In some areas we know help is really good but elsewhere services are frankly not up to scratch, with only a few people receiving at least an annual review of their care following diagnosis.

“This is an unacceptable postcode lottery of care. We must continue efforts to improve both access to, and quality of, care for the growing number of us living with dementia.”

There are 676,000 people living with dementia in England and this figure is set to rise.

Mr Hunt said that by publishing the current levels of care “we are shining a spotlight on areas where there is still work to be done, whilst highlighting where we can learn from best practice”.

The dementia atlas also shows which areas of England are dementia-friendly communities – places that have taken steps to make life easier for people with dementia and their carers. This might include training local shopkeepers on how to interact with customers who have dementia, for example.

While much of West Midlands and Yorkshire are now dementia-friendly, many other regions north and south of these areas are not.

Mulligan’s new role will see her draw attention to the importance of making communities dementia-friendly.

Her grandmother Margaret, known as “Nans”, was diagnosed with Alzheimer’s in 2004.

The award-winning actress said: “My Nans has dementia and I have experienced first-hand how devastating it can be.

“It affects everyone differently and it’s so important that everyone affected by the condition is treated with the respect and dignity that they deserve. At the moment, there’s not nearly enough awareness and as a global society we have a duty to change that.

“The first step involves educating people and breaking down stigma – not just on our doorstep, but across the world.

“I’ve seen my mum doing this in her role as a Dementia Friends champion – now I’m honoured to become the first Global Dementia Friends Ambassador and help Alzheimer’s Society and the Government change global attitudes towards dementia.”