A confidential review of government plans for a seven day NHS in England has identified 13 risks, according to the Guardian and Channel 4 News. 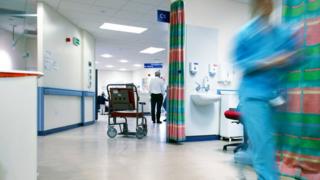 These include concerns over a shortage of doctors and other health staff.

The leaked risk register was drawn up by the Department of Health, and sets out a series of possible problems.

The Department of Health said the government was tackling an “unacceptable variation” in standards in care across the week.

The government has promised a “truly seven-day service” by 2020.

The documents, obtained by Channel 4 and the Guardian, also say there is a high risk of “workforce overload” and are said to show that senior officials are concerned over the lack of detailed costings, risk assessment, and limited data supporting the policy.

The BBC has not seen the leaked register in full.

According to Channel 4 News, another document which references a meeting with the 7 Day Services Governance Group, says: “The detailed costs of delivering in hospitals, including accurate estimates of additional workforce requirements are not understood early enough.”

And according to a further document called Building The Evidence Base, no advance impact assessments have been done on how seven-day services will affect GPs, hospitals, and urgent and emergency care.

One of the documents expresses fears that the policy may not deliver on its key aim of improving services at weekends.

It states: “It is possible that the programme delivers the planned outputs, but this does not result in the desired change (delivering against the plan but missing the point).”

Creating a seven-day NHS makes a catchy slogan, which is why the Conservatives have made so much of it.

And there is plenty of evidence it would benefit patients.

But implementing it is a whole different matter. You only need to look at the row over the junior doctor contract to see that.

The most fundamental problem – and it is one apparently pointed out in this review as well as by numerous experts previously – is a lack of money.

Yes the NHS is getting extra funds this Parliament but it is still struggling to stand still. Waiting times are increasing and hospital deficits are rising.

Asking the NHS to do more is seen by many in the health service as completely unrealistic.

News that this review has been circulating within the corridors of power will only strengthen that feeling.

British Medical Association head Dr Mark Porter said it had repeatedly raised concerns about the “lack of detail and absence of any plan” for the seven day NHS.

He added: “To see in black and white that the government has not only ignored these concerns – and those of other leading healthcare organisations – but has also disregarded its own risk assessment’s warnings about the lack of staffing and funding needed to deliver further seven-day services, is both alarming and incredibly disappointing.”

Diane Abbott says the government is undermining the NHS

She added: “They pressed ahead with their proposals even when campaigners and NHS staff argued they were unworkable.

“It has now been confirmed by the advice the government received from its own civil servants. This is a scandal. The government is undermining the NHS with plans it knew to be unworkable.”

A Department of Health spokesman said: “Over the past six years, eight independent studies have set out the evidence for a ”weekend effect” – unacceptable variation in care across the week.

“This government is the first to tackle this, with a commitment to a safer, seven day NHS for patients and £10bn to fund the NHS”s own plan for the future, alongside thousands of extra doctors and nurses on our wards.”