More organs are being donated and more lives saved a year after Wales became the only nation in the UK to introduce a new donation law, say ministers. 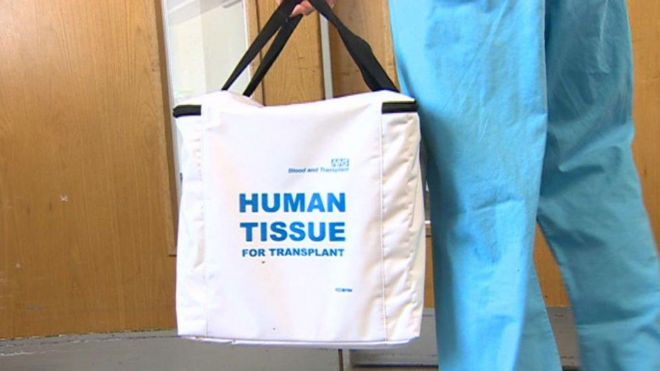 Adults are regarded as having allowed organ donation unless they have opted out.

In the last year, there have been 160 organs transplanted and 39 were through deemed consent.

Wales’ Health Secretary Vaughan Gething said numbers were encouraging and the change had been “good news”.

In 2016, up to September, there were 42 deceased organ donors, broadly in line with previous years.

A woman who had a double-lung transplant last Christmas has written an emotional thank-you letter to her donor’s family – as Wales marks the anniversary of a major new law.

Although numbers of donors naturally fluctuate year on year, the Welsh Government says it is confident that earlier hopes of a 25% increase in the number of donors will be reached in future.

“There’s a much greater awareness of organ donation itself,” Mr Gething said.

“More people are having those conversations with their loved ones about whether they want to opt in or to simply leave it as a point of deemed consent.

“It makes a real difference then to have that conversation at that point in time when it becomes a possibility and makes it much easier for health staff too.”

He said on its own measures it had been a success but there was still more to be done and it could be several years before the full impact of the law change was apparent.

Consultant Dr Chris Hingston, clinical lead for organ donation at University Hospital of Wales in Cardiff, said: “We’ve seen a big impact at the bedside in terms of families approaching us to ask about organ donation, but equally families when we asked them if their loved ones wished to become a donor actually know the wishes.

“Even if that’s not to become a donor, so they’re refusing, but they’re confident that that’s the right decision for their loved ones.

“As a clinician that’s all I ever wanted – that there wasn’t a grey area where there’s indecision and difficulty for families.”

Bill, 67, [whose surname we are not using] was admitted to the critical care unit at the University Hospital of Wales in Cardiff after suffering a stroke and a fall.

His daughter Karen said: “Dad had talked about organ donation.

“It’s the last serious conversation that we’d had, not knowing that in a few weeks time, that was going to have to happen.

“I think I would have coped with it a lot worse if I hadn’t have had the transplant to focus on.

“It’s like he still had a job to do, even though he couldn’t do anything, he was still doing something.

“He was looking after those organs before they could be given to somebody else.

“It’s made losing him easier, because it’s like something good has come out of it, and I can’t think of any other circumstance when someone dies that something good comes out of it.

“It’s quite a negative final thing, whereas for dad, it still doesn’t feel final because parts of him are living on in someone else.

“Nothing’s going to make up for losing my dad.

“But it makes it a little bit easier to swallow knowing that he’s gone on to help other people.

“He’s always been my hero, even more so now.”

The kidney donations helped transform the lives of two people.

NHS: Organ donation in Wales – what it means

In the UK, 62% of families agree to organ donation when approached – but there are hopes of increasing that proportion to 80%.

There is a particular shortage of donors from black and ethnic minority backgrounds.

Consultant transplant surgeon Mike Stephens said fluctuations in donation numbers made analysis difficult but he was positive about the impact.

“This is about change of approach, change of attitude and I think we’re seeing that,” he said.

“So I think we have seen success from this change.”

A three-part documentary, The Greatest Gift, following the transplant story at the University Hospital of Wales, will be shown from 6 December on BBC One Wales at 22:40 GMT.