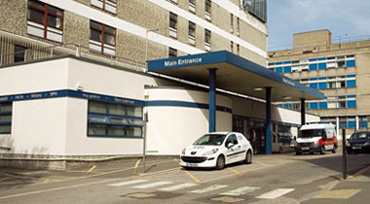 Following a campaign by GMB at Watford General hospital two hospital porters have been reinstated after they were suspended before Christmas for refusing to work in an unsafe manner with unsafe equipment.

Both workers were told to report to work today, 16th of January 2017, following a five week suspension and all charges against them have been dropped by their employer Medirest.

The safety problems erupted following workers complaints over food trolleys and how they were loaded.

A hospital worker said, “Pushing loaded trolleys around a busy hospital when you cannot see over the loads is an accident waiting to happen, also the trolleys sharp edges resulted in ankle injury. We told our managers but eventually the GMB rep refused to work with the trolleys and was suspended, then another lad, who also refused, was suspended”

Mick Dooley, GMB London organiser, said, “Both workers were potentially facing dismissal from their jobs, their unwarranted suspension came before Christmas so the festive season was a little less festive in their homes this year. Their crime was to ask for a proper instruction before they used the equipment, and for that they are kept under a cloud for five weeks fearing the worst. However, their union brothers and sisters did not turn their backs on them and many were prepared to go on strike to ensure that a just outcome prevailed.

Hospital workers were angered by what they saw as an attempt to intimidate them and stop them raising safety issues. However the members went on the offensive raising publicity, meetings and petitions and demanded the immediate reinstatement of their colleagues. Reinstatement followed a meeting with senior GMB officials and the company.

Watford General has seen recent growing unrest among hundreds of workers who are paid ten pence above the minimum wage and some paid only the minimum wage. Workers will meet with GMB to discuss their position and following this latest attack by management.”

Local politicians like Chris Grayling, Paul Scully, Tom Brake and Siobhan McDonagh should do the job that they were elected to do which is to defend our two acute hospitals says GMB GMB, the union for […]

Paramedic Cleared of All Allegations of Misconduct by the HCPC

The HCPC has an important role in regulating paramedics and protecting the public but the process is daunting and it’s important for our members to know that you are not alone says GMB Southern. A […]

Sarah Kelly prompted GMB Protect the Protectors campaign to introduce tougher sentence for those who attack emergency service workers. A brave ambulance technician who suffered a harrowing sexual assault before using her experience to campaign […]