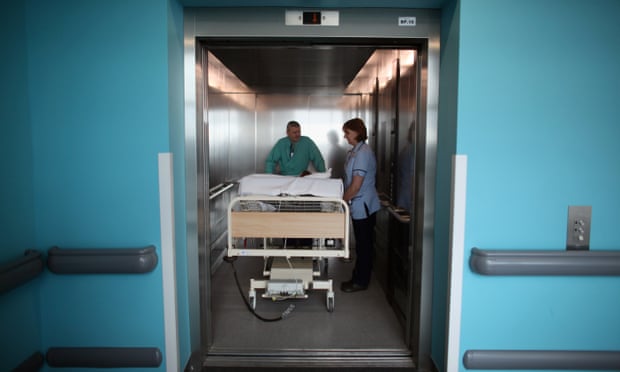 An increasing number of patients are having to endure long waits for operations, according to a study that provides the latest evidence of the NHS’s failure to meet waiting time targets because hospitals are so busy.

Analysis by the Royal College of Surgeons found that over the past year an average of 193,406 people a month did not get surgery within 18 weeks of being referred.

The figure compares with 139,240 the previous year and 105,427 four years ago, and is the NHS’s worst performance by this measure since 2008. It covers patients waiting for operations including for broken limbs, traumatic injuries, brain conditions and eye problems.

Ian Eardley, the college’s vice-president, said: “We are now struggling to meet the standards and timeliness of care that the public rightly expect. Waiting longer creates prolonged pain, uncertainty and immobility for patients and is stressful for them and their families, especially those who may be very ill or in significant pain.

“Many of these patients are older and in the most serious cases, such as heart or cancer surgery, waiting longer could have a big effect on the quality of someone’s life and their eventual recovery from surgery.”

He said the sharp rise in the number of patients waiting longer than 18 weeks suggested the NHS had passed a tipping point.

In October 2016, for example, patients who had been on the waiting list for more than 18 weeks included 52,816 who needed trauma and orthopaedic surgery, 33,547 classified under general surgery, and 24,578 who needed a procedure to improve their eyesight.

The number of women who did not receive gynaecological surgery within the target time rose by 102% in the same period, to 14,795 a month.

The shadow health secretary, Jon Ashworth, said he hoped hospitals’ poor performance against surgery waiting time standards would not prompt the government to soften the targets.

“We already know ministers want to water down the A&E target. Given this more widespread deterioration in waiting times, I hope this won’t lead to ministers abandoning others standards too,” he said.

Eardley said the delays in accessing surgery were likely to get worse given the intense pressure on hospitals and widespread bed shortages. “There is no sign of waiting times reducing any time soon and they are very likely to have become worse this winter. The key question is: how much longer will patients have to wait before the government steps in to relieve the pressure?”

On Friday, Theresa May seemed to edge closer to acknowledging the seriousness of the crisis confronting the NHS. “I recognise, and we have acknowledged, that the NHS is under pressure,” she said at a Downing Street press conference. She stressed the NHS had put £400m into preparations for coping with winter pressures.

She had said on Thursday there had been a “small number” of incidents of unacceptable practice in NHS trusts, and the health secretary, Jeremy Hunt, said there were problems in “one or two” areas.

Earlier on Friday 13th January 2017, NHS England revealed that 65 out of its 152 acute trusts had had to declare an alert during the first week of January.

Members of the Council of the Royal College of Physicians (RCP) have written to the prime minister, Theresa May MP, to set out their concerns about the capacity and resources needed to meet the demands […]

Starbucks Gives Back to Everyday Heroes with New Discount Programme

Emergency Services, NHS, Armed Forces and Veterans across the UK can now receive a 10% discount at Starbucks with a Blue Light Card or Defence Privilege Card Starbucks has joined forces with Blue Light Card […]

In order to enhance patient care, improve services and develop surgical training we must look to the effective and consistent use of roles within the extended surgical team. Today we are pleased to welcome roles […]